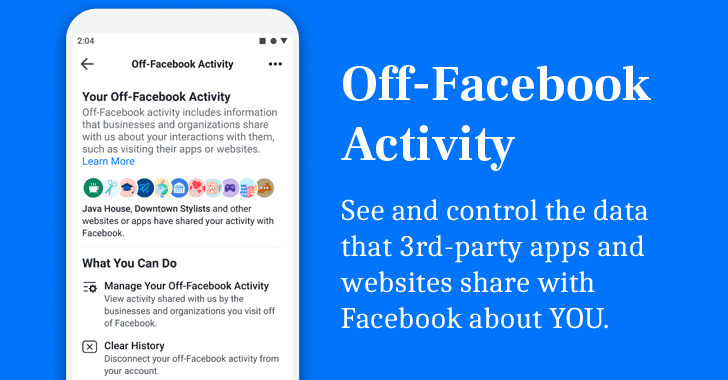 Well, here we have great news for Facebook users, which is otherwise terrible for marketers and publishers whose businesses rely on Facebook advertisement for re-targeted conversations.

Following the Cambridge Analytica scandal, Facebook has taken several privacy measures in the past one year with an aim to give its users more control over their data and transparency about how the social media giant and other apps on its platform use that data.

Now in its new effort, Facebook has launched a new privacy feature that allows its users to control data that the social media platform receives from other apps and websites about their online activity.

“Off-Facebook Activity lets you see a summary of the apps and websites that send us information about your activity, and clear this information from your account if you want to,” Facebook says in a post published today.

“We expect this could have some impact on our business, but we believe giving people control over their data is more important.”

What Are Off-Facebook Activities?

For those unaware, Facebook collects its users information in two ways—first, through the information you fill into its site and apps, and second, by tracking your browsing history via Login with Facebook, Like button, Facebook comments, and invisible code called Facebook Pixel embedded on other sites—to know which websites you visit when you’re not on Facebook.

It’s probably happened to you—when you scroll through your Facebook feed, the social media site displays advertisements from some specific brands whose websites you have recently visited.

How to Use Off-Facebook Activity Tool? 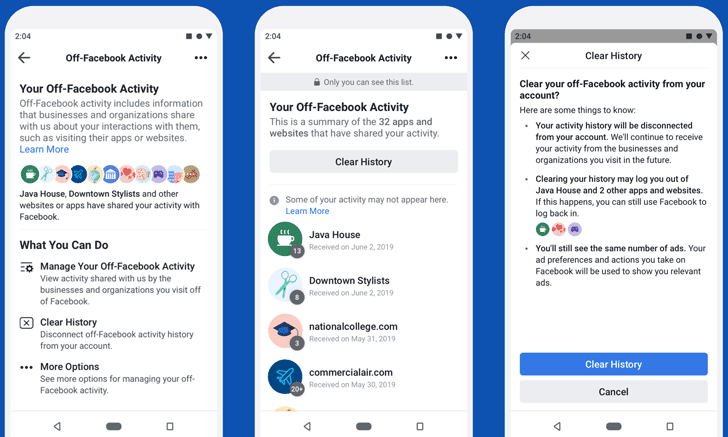 Now, with the help of the new tool, you will be able to see a summary of the data other apps and websites have sent Facebook through its business tools as well as disconnect this information or all future off-Facebook activity altogether from your account.

To use this tool, go to your Facebook account’s settings and click on Off-Facebook Activity. Once open, you will see the apps and websites that are tracking your activity and sending reports to Facebook for ad targeting.

You can tap the “Clear History” button to clear your browsing history and disconnect your Facebook account from selected apps and websites or all of them in the future.

“We won’t know which websites you visited or what you did there, and we won’t use any of the data you disconnect to target ads to you on Facebook, Instagram or Messenger,” Facebook said.

However, it’s important to note that the feature doesn’t actually allow users to delete their browsing information; instead, it simply lets users dissociate collected data from their Facebook account.

In the background on its Database structure, Facebook now assigns a unique SID to each online activity that an app or website shares with it and then associates those SIDs with your profile referring as a unique UID.

As shown in the diagram, when you click the “Clear History” button, the feature basically dissociates your off-site activity by simply removing the mapping between the UIDs and SIDs instead of deleting all rows and columns in its database.

“In most cases, when a person uses Off-Facebook Activity to disconnect that information, we remove this mapping between the UID and SID within 48 hours, which breaks the process of joining individual rows in data warehouse tables with a user account,” Facebook’s engineering team said in a separate blog post.

“If a person chooses to have off-site activity disconnected going forward, we automatically disconnect it and rotate SIDs on a daily basis. We took a similar approach to other information that carries a risk of user identification, like browser or device identifiers, and converted those to alternative SIDs as well.”

In simple words, Facebook will still hold on to the information it collected on you but will anonymize that data rather than pair it with your profile.

Starting today, the social media giant has begun rolling out the Off-Facebook Activity feature for Facebook users in Ireland, Spain, and South Korea, which would be followed by a worldwide launch “over the coming months.”