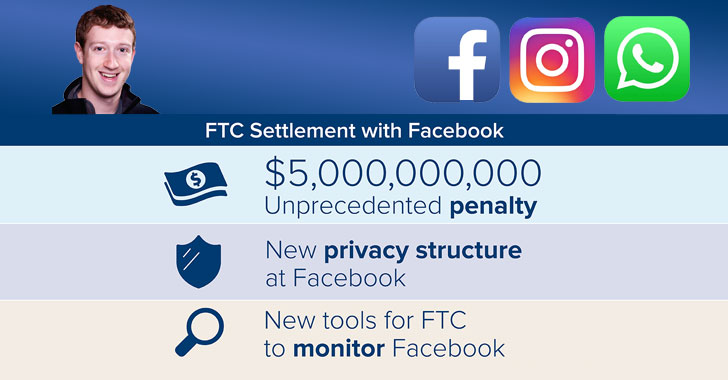 Besides the multibillion-dollar penalty, the company has also accepted a 20-year-long agreement that enforces it to implement a new organizational framework designed to strengthen its data privacy practices and policies.

The agreement requires Facebook to make some major structural changes, as explained below, that will hold the company accountable for the decisions it makes about its users’ privacy and information it collects on them.

“The order requires Facebook to restructure its approach to privacy from the corporate board-level down, and establishes strong new mechanisms to ensure that Facebook executives are accountable for the decisions they make about privacy and that those decisions are subject to meaningful oversight,” the FTC said in a press release.

According to the FTC, Facebook has repeatedly used deceptive disclosures and settings to undermine its users’ privacy preferences in violation of its 2012 FTC order that required the social media to gain explicit consent from users to share their personal data.

“We’ve agreed to pay a historic fine, but even more important, we’re going to make some major structural changes to how we build products and run this company,” Facebook CEO Mark Zuckerberg said in a statement.

“As part of this settlement, we’re bringing our privacy controls more in line with our financial controls under the Sarbanes-Oxley legislation. Our executives, including me, will have to certify that all of the work we oversee meets our privacy commitments.”

“The reason I support them is that I believe they will reduce the number of mistakes we make and help us deliver stronger privacy protections for everyone.” 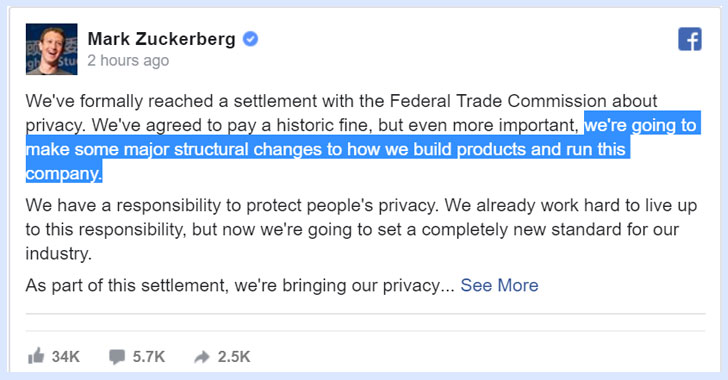 Major changes will include:

According to the FTC, this measure will create greater accountability at the board of directors level, removing unfettered control by Facebook’s CEO Mark Zuckerberg over decisions affecting user privacy.

It will be mandatory for compliance officers to submit compliance certificates every quarter as well as year to the FTC, ensuring that the company is running the privacy program as mandated by the order.

Compliance officers will also be required to generate a quarterly privacy review report, which they must share with the CEO and the independent assessor, as well as with the FTC.

3. Strengthening external oversight of Facebook — The order also strengthen the role of independent third-party assessors who will conduct assessments of Facebook’s privacy program every two years to identify gaps.

Independent assessors will report directly to the new privacy board committee every quarter. 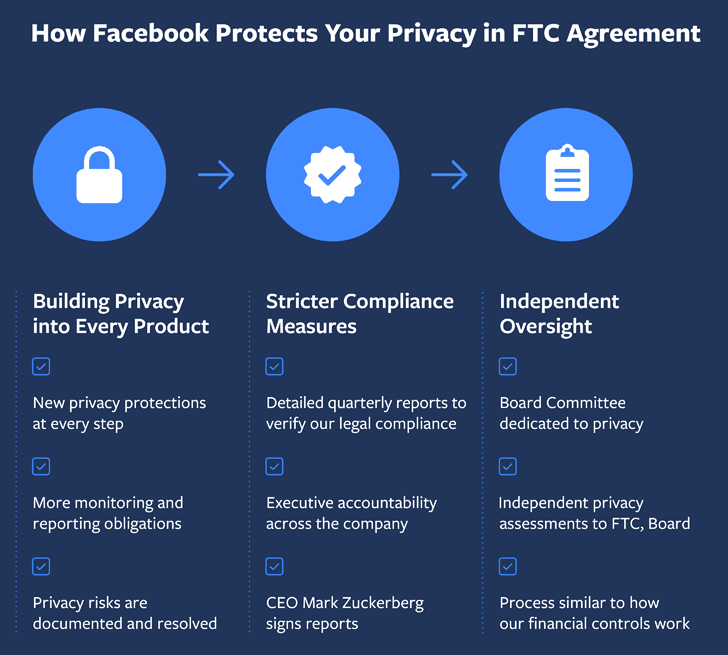 4. Privacy reviews — The order also enforces the company to conduct a thorough review of every new product or service that it develops. These reviews must be submitted to the company’s CEO and a third-party assessor every quarter.

5. Document security incident — Facebook will need to document any incident that compromises data of 500 or more users and its efforts to address such incidents. It is required to deliver this documentation to the FTC and the assessor within 30 days of the company’s discovery of the incident.

To fix this, the FTC has also asked Facebook to closely monitor third-party apps and how they use users’ collected data, suggesting it to terminate any app developer account who fails to comply with its privacy policy or fails to justify their need for specific user data.

Besides these significant changes, the order also highlights some minor requirements, including:

In a blog post published today, Facebook said it is building a new privacy program in compliance with the latest FTC requirements which will change the way Facebook handles its users’ data and helpful in “rebuilding trust with people.”

“We will adopt new approaches to more thoroughly document the decisions we make and monitor their impact. And we will introduce more technical controls to better automate privacy safeguards,” Facebook says.

Besides the FTC settlement, Facebook also resolved an ongoing investigation by the Securities and Exchange Commission (SEC) over charges of making “misleading disclosures” regarding the risk of abusing users’ data and agreed to pay a $100 million penalty as part of the settlement.