Adobe Releases Patches for Dozens of Critical Flaws in 5 Software 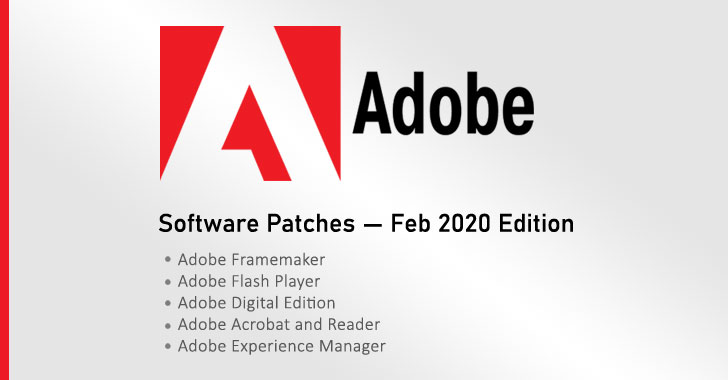 Here comes the second ‘Patch Tuesday’ of this year.

Adobe today released the latest security updates for five of its widely used software that patch a total of 42 newly discovered vulnerabilities, 35 of which are critical in severity.

The first four of the total five affected software, all listed below, are vulnerable to at least one critical arbitrary code execution vulnerability that could allow attackers to take full control of vulnerable systems.

Whereas, the latest update for Adobe Flash Player, one of the most infamous software in terms of having the worst security record of all time, has patched yet another critical arbitrary code execution flaw. If exploited, this flaw could allow hackers to compromise targeted Windows, macOS, Linux, and Chrome OS-based computers.

At last, Adobe Experience Manager—a comprehensive content management solution for building websites, mobile apps, and forms—doesn’t contain any critical flaw this time but has patched an important denial-of-service (DoS) issue that affects only versions 6.5 and 6.4 of the software.

Though none of the software vulnerabilities fixed this month were publicly disclosed or found being exploited in the wild, The Hacker News still highly recommend readers to download and install the latest versions of the affected software.

If your system has not yet detected the availability of the new update automatically, you should manually install the update by choosing “Help → Check for Updates” in your Adobe software for Windows, macOS, Linux, and Chrome OS.

Besides this, you are also advised to follow some basic system security practices, such as: